From Renegade-X Wiki
Jump to navigation Jump to search 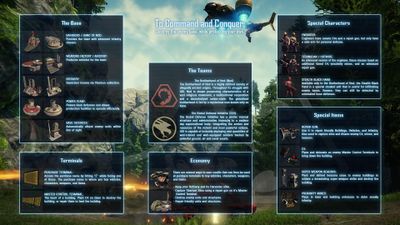 Command & Conquer mode, also known as C&C mode, is a game mode where the only objective is to destroy the enemy faction's base. Every base consists of a certain amount of buildings which varies on every map. Per example, a base may contain structures that provides advanced infantry and vehicles, but may not have advanced base defences.

Each building serves a unique purpose. Destruction of a building may lead to decreased, or no functionality for this building, and anything corresponding to it. Not a single building is required to build a map, but Each faction will need at least a single building in order to play this game mode. Do however note that some buildings do not count towards game starting or ending by default, such as basic base defences. Buildings that are not included in a map usually do not provide their functionality in that map on default, except for the Power Plant. If a Power Plant is not included in a map, each unit and building will still work as if there is full power available. If any other building, like a Tiberium Refinery is excluded, there will be no income on that map.

C&C mode heavily relies on economy to keep each faction's base operational. If a player has no Credits, no vehicles or advanced infantry can be bought. Credits are gained over time automatically by the Tiberium Refinery, Tiberium Silo, or a captured tech building Silo. They can also be gained by performing activities that gain Points, such as repairing/capturing and/or damaging/destroying units and buildings. It can also be donated to you by from an ally's cashpool.

Depending on whether the game mode has a time limit or not, the game can be ended in different ways. But there are also ways to end a game which are not specific to a time limit:

Note that a surrender vote will promote all the players on the opponent team to Heroic Veterancy, and initiate a countdown of five minutes before the game ends. This gives the enemy team a chance to attain satisfaction of destroying the surrendering team's base.

- Base destruction: Whenever a team destroys every one of the enemy's core buildings (certain buildings like basic base defences do not count towards ending games), the game will end by victory for that team. Buildings can be destroyed by conventional means, such as explosives or vehicles, or can be destroyed by successfully planting a Superweapon Beacon on or near the enemy building, and defending it. Each faction owns a Superweapon Beacon, which every player in their team can buy for 1000 credits. GDI owns an Ion Cannon Beacon, and the Brotherhood of Nod owns a Nuclear Strike Beacon.

All-out War means that a map that runs C&C mode has a time limit. Time limits can vastly change the ways to win a game. If the time limit expires, the team with the most Points wins. If a team feels like they cannot end the game by enemy base destruction, but are on a point lead, they can decide to prevent the enemy team from gaining points by bolstering their defences. They can also decide to instead increase their point lead by performing actions that earn your team more points than the enemy team. Therefore, careful consideration of attack and defence becomes very important, or even willingly letting their easily camped buildings get destroyed to prevent Pointwhoring by the enemy team.

The addition of points to a game can provide new ways to play the game, even though it may not always give a team the satisfaction of a crushing victory by base destruction.

Marathon means that a map that runs C&C mode does NOT have a time limit. Therefore, certain aspects that were part of the game like gathering points as efficiently as possible become obsolete. Many may still argue that points are still important in a Marathon game because more points = more credits, but once again there are ways to prevent yourself from running out of money.

Marathon games are often played in the spirit that there is no other way to victory than the crushing defeat of enemy base destruction. However, this ideology makes certain aspects of the game even more important, as there is no time limit to rely on, which makes Marathon games require different strategies from teams to end a game.